In this post, I'll tell you all about my propane refrigerator problem and how you can avoid it yourself! Ready? Let's Go!

I had seen other tiny houses with propane refrigerators, including the Protohaus, and knew I wanted to use one in my tiny house. The primary reason I wanted a propane refrigerator is that I wanted my house to use as little electricity as possible in the event that I decide to live off-grid (self-sufficient and not connected to the power utility). The Protohaus is parked in upstate New York, which has a similar climate to Vermont. Therefore, I never considered or bothered to check whether climate would affect the operation of the refrigerator.

Last winter, however, I noticed that items in my refrigerator were freezing solid. This would occur particularly when the temperatures outside got below zero degrees. Not good! Having food that freezes in your refrigerator is not just an inconvenience. It wastes food. When a freeze, they crack open. Glass jars that are full also crack. What am I to do?

Why is the Refrigerator Freezing? (My propane refrigerator problem explained)

The back of the refrigerator has two air vents that are exposed to the outside. Unlike electric refrigerators, propane units for RVs and mobile homes require ventilation to the outside. Absorption style refrigerators that run on propane rely on the temperature differential between the lower vent and the upper one. Not to mention, burning propane produces carbon monoxide, which needs to be vented outside of the cabin.

My first theory on why the refrigerator is freezing was that since the unit is vented, the arctic winter air is getting in behind the refrigerator and cooling it down beyond the 40 or so degrees you want a refrigerator to be. And since it’s only got the apparatus to cool itself down (not heat itself up), it’s just freezing solid in the cold weather. It turns out that I was only partially correct (we’ll get to that later).

The refrigerator I purchased can run on both propane and electricity. I figured that, running on electric mode, the refrigerator would not need the air ventilation that it needs in the propane mode. I was wrong. When I was at Pete's RV last month, I spoke to a technician and learned that running the fridge in electric mode does not eliminate the need for ventilation. The electricity just runs a heating element that replaces the heat provided by the propane. The temperature differential and airflow are still required, regardless of whether you’re running the refrigerator on gas or electricity.

“During a typical cycle, heat is applied by either an electric heating element or a propane burner. During the process of removing the heat from inside the refrigerator and freezer (the absence of heat is cold), the water and liquid ammonia are boiled and evaporated, then condensed back into a liquid over and over. And since water freezes at 32 degrees Fahrenheit . . . well, you can begin to see how very low temperatures can have an effect on absorption refrigeration, just as much as extremely high temperatures.” – RVDoctor

So, I began researching what other RVers do in the winter. What I've learned is not ideal.

I’ve heard murmurs on RV blogs about potentially blocking *some* of the airflow to your refrigerator vents with insulation, but that advice also comes along with “at your own risk”, and is also counter to the manufacturers advice (and will apparently void your warranty).

Another strategy is to add a lightbulb on some kind of thermostatic controller to the back of the fridge raider cavity. This provides some heat to the unit and prevents it from freezing up. I'm not a fan of this technique, both from a fire safety perspective (there are wires and other flammable things back there) and because I really don’t like the idea of heating the outside, so that I can have a cold refrigerator inside

According to the RV Doctor, refrigeration isn’t needed in the winter, anyway:

“Just put the lobster tails and prime rib in a cooler and set it outside! Once the ambient air gets closer to the freezing mark, then you can move the food back inside; the RV absorption refrigerator should operate fine at temperatures near freezing and above.” – RVDoctor

This may be a workable strategy for weekend getaways in your RV, but for a house that you live in full-time, having to move food outside and inside depending on the temperature is not an inconvenience I'm willing to deal with. Additionally, in Vermont the temperature stays below freezing for most of the winter. So again, the outside becomes a freezer, not a refrigerator.

This Q&A found on a Norcold Parts blog (the company that makes my fridge) sums it up:

When it Gets Below Freezing Outside Does Your Norcold Refrigerator Stop Working?

You are not alone! Norcold RV Refrigerators that are gas absorption models will not run efficiently when the temperature drops below freezing. The only way to solve this problem is to retain temperature at the top of the cooling unit. Doing this often times causes fire hazards! Many RVers block up their upper vent to keep some of the heat from escaping and the problem that comes of this is that those RVers sometimes forget to remove whatever is obstructing that upper vent when Spring rolls around or when they get into warm ambient temperatures. This is certainly a fire hazard and it is the reason that Norcold cannot recommend doing this… Unfortunately, gas absorption refrigerators will not run efficiently in low ambient or hot ambient situations! – Norcold Parts

I don’t know about you, but anything that is a potential fire hazard is kept away from my tiny house.

Do I Recommend Propane Refrigerators for Tiny Houses?

If you plan to have your tiny house in a region that does not go below freezing very often, a propane refrigerator is a pricey but excellent investment. When running on propane, it uses no electricity. This will make your tiny house able to be off-grid without requiring a large amount of solar or other alternative energy. However, if you are planning to be somewhere where the temperatures go below freezing, stay away from propane refrigerator. You'll wind up with the same propane refrigerator problem that I have. In addition to the issues mentioned above, having to vent the refrigerator to the outside lets a large amount of cold air into the back of my cabinets, in an otherwise impeccably insulated tiny house.

What am I Going to Do?

It’s certainly going to feel like a slap in the face, but I will most likely replace my propane refrigerator with a similarly sized electric unit. I will then patch the vent holes and reinsulate them so the back of my fridge stays nice and warm. The worst part about this is that my propane fridge cost over $700, and most comparable electric refrigerators can be had for less than half that amount.

As I said earlier, it’s impossible to think of everything you should research before you build your tiny house. Sometimes you’ll make a decision, go with it, and find out later that it was not the best for your needs. Heck, I even wrote a book about tiny house decisions, and I didn’t really grasp the reality of this problem until after I wrote it!

I have finally taken action and removed the propane refrigerator that was causing me so much trouble! 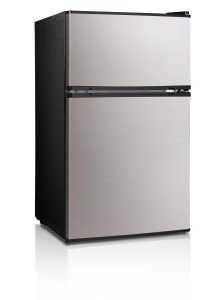 I opted for the Midea WHD-113 because it has a separate freezer compartment, would fit in my existing refrigerator enclosure, and had mostly positive reviews.

The new refrigerator doesn't quite have the “built in” look that the propane unit had, but as the temperatures have been dropping this fall, I have already noticed a difference. Now when I walk by the refrigerator I don't feel freezing cold air with my feet. I've solved my propane refrigerator problem!

Having a dedicated freezer space is also quite helpful for storing meat and other items that I don't want to use right away. 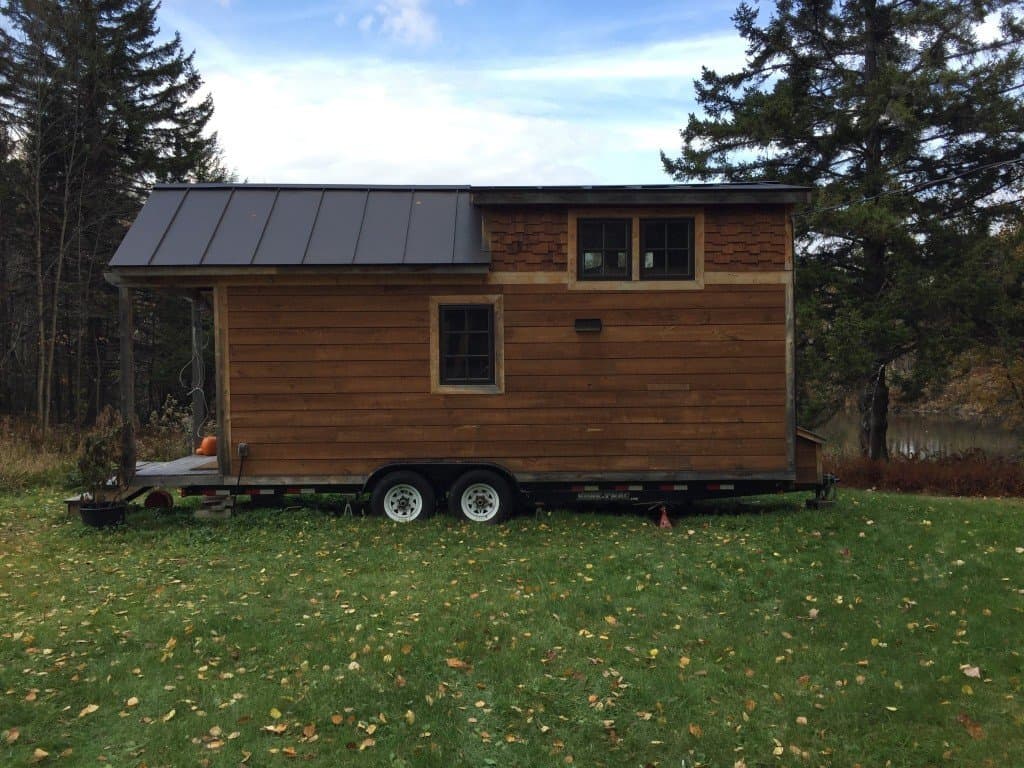