Not long after Ariel McGlothin moved into her tiny house in the western Wyoming mountains, her propane heater quit working.

It was winter. Temperatures had dipped to -30 degrees Fahrenheit. And Ariel had the flu.

After that, Ariel realized that relying on an electricity-fueled heater probably wasn't the way to go: “I decided that was the end of me only having one heat source,” Ariel explained in an episode of the Tiny House Lifestyle podcast. “Now I actually have three, which is overkill.”

But at least Ariel knows she won't go cold.

Ariel owns a “160-ish” square meter Tumbleweed Cypress tiny home, where she lives completely off the grid with her English Shepherd called Burly. She also runs a YouTube channel, where she records her “Life in a Tiny House called Fy Nyth,”  which means “my nest” in Welsh.

Ariel and her pup, Burley

How this Wyoming tiny house stays comfortable without public utilities

Ariel never actually dreamed of living in a tiny house. For her, moving into a tiny home was more about survival in the beautiful — but pricey — part of Wyoming where she lived.

“It was actually a very, very short process from realizing I was about to be homeless at the start of a Wyoming winter to moving in here,” Ariel says.

Ariel bought her house and moved in six years ago. It wasn't long before she realized that she enjoyed pretty much everything about the off-grid lifestyle. She liked chopping wood. She liked growing her own food and then canning and cooking in the kitchen. She preferred using her compostable toilet to a flushable one. And she especially enjoyed stepping outside her front door to photograph the wildlife around her.

But living off grid, 6,000 feet above sea level, and in an area that frequently experienced snow and subzero temperatures wasn't particularly easy, either. Ariel quickly rose to the challenges of living off grid in the mountains, and over the years she's discovered some of the most efficient ways to handle off-grid living in extreme winter weather.

1. Keep toasty in sub-zero temperatures with a wood-burning stove

These days, Ariel's main source of heat is her wood-burning stove.

“It really can't break other than running out of wood, and I live in the middle of millions of acres of standing dead beetle-killed pine,” Ariel says.

She's taken advantage of her natural surroundings, chopping wood into 7.5-inch logs to stuff into her 12-square-inch stove. The resulting fire easily heats up her entire home, which is insulated with spray foam. Even when the snow piles up outside, the cork floor keeps her feet warm.

Fy Nyth YouTube viewers are a curious bunch, and they're particularly curious about how she keeps warm: “That's a … question I get: ‘Oh well, that must suck that you gotta get up in the middle of the night to stock your wood in your stove.'” Ariel says. “I don't. I am way too lazy to do that. I like sleeping uninterrupted.”

Instead, Ariel takes advantage of the fact that she sleeps in an elevated loft behind a curtain. Ariel prepares the stove so that it gets “a little hot” before she goes to bed. As the heat rises, it reaches a comfortable temperature once it gets to her bed. It remains nice and warm throughout the night, only dropping down to 55 degrees when she wakes up in the morning.

Plus, Ariel has a backup propane heater that works without electricity. If she leaves for a day or two, she turns it on low setting to stop her house from freezing while she's gone. 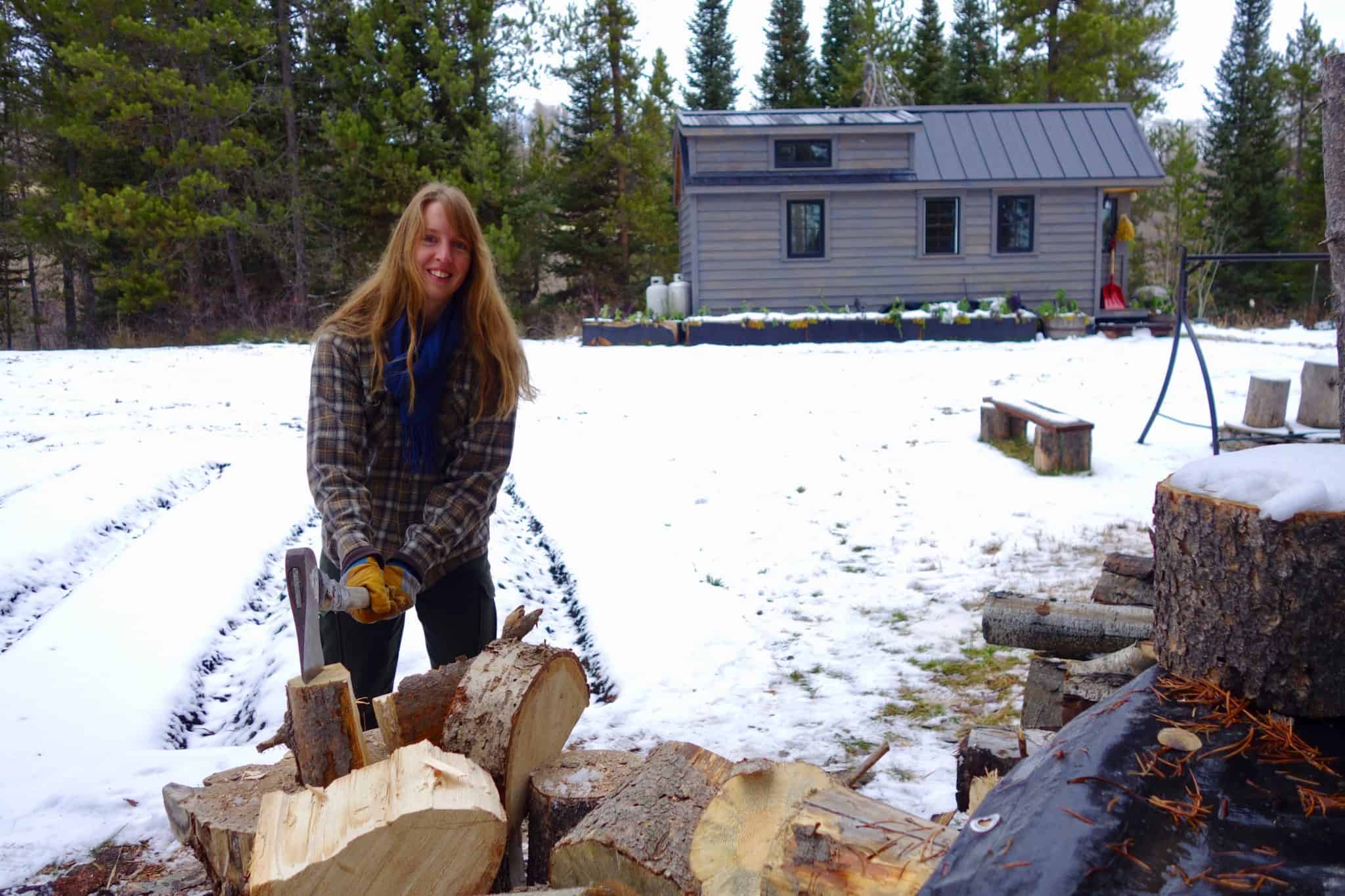 Chopping wood for her stove

2. Harness power from the sun

Instead of connecting to an electrical grid, Ariel uses a small solar panel system.

The problem with solar power, of course, is that it needs the sun — and on days with heavy precipitation or little daylight in December and January, sunshine can be in short supply. So Ariel uses a generator as backup.

Many people living in modern American houses are used to a full electrical setup, and they want to keep it that way when they move into a tiny home, Ariel says.  She estimates that some people who move to tiny houses but still need plenty of electricity install solar setups on their rooftops worth $60,000.

“That's not what I choose to do,” Ariel says. “I choose electricity for very, very limited things here.”

Ariel doesn't have a TV, electrical heating or air conditioning, large fridge, or hairdryer. And lucky for her, Ariel isn't a fan of toast, so she has no use for toasters either. Because of her low-energy consumption, she was able to install a smaller — and considerably less expensive — solar setup instead. Overall, it cost her about $3,500 for batteries, wiring, a generator, and everything else.

Although Ariel enjoys many aspects of tiny home living, manually carrying her water supply from a well to her home isn't exactly one of her favorite activities.

Ariel cares for her garden with the water from a small nearby creek. But keeping a supply of drinking water is a bit more cumbersome. So Ariel fills up her water jugs from a neighbor's well, carries them home, and pours it into her own water tank.

She also has a 10-gallon propane hot water heater, which has kept her water hot even in the coldest conditions. . When her friends came to visit one spring, with their own portable tiny house, their small on-demand water heater only managed to produce lukewarm water and couldn't match the power of her propane heater.

But getting used to water in a wintery climate came with some expected challenges as well, like freezing drains. Years ago, Ariel put ice chunks in her sink without giving it a second thought. The ice slowly melted and dripped down, but then froze once again at the bottom of the drain.

“I have learned: Do not leave ice cubes or chunks melting in the sink when it's cold.”

Off-grid, tiny living: Physically demanding, but entirely worth it

Overall, all of these off-the-grid solutions have given Ariel a small space of her own, and a lifestyle that she values and genuinely enjoys.

Ariel sometimes wishes she had a slightly bigger pantry, or perhaps a little extra space to put overnight guests. But other than that, Ariel calls her home the “perfect space.”

“For me personally, that's because of my particular interests and hobbies,” Ariel says. “I like to hike and backpack [and] do wildlife photography. And then my indoor hobbies are cooking, and half my house is a kitchen so I do have room for that.”

But one of the best advantages of her space, Ariel says, is the freedom that it brings her. Ariel doesn't have ongoing utility bills, and she doesn't pay rent (although she does take on some physical tasks instead of paying the landlord of her plot). That means she doesn't need to work 40 hours a week, and she has plenty more time to do the things she loves.

“I get a whole lot of comments from folks much older than me on my channel on a regular basis saying, ‘Oh I wish I had known that doing that was an option when I was younger,'” Ariel says. “And I think, ‘Well, who told you it wasn't?”

Want to learn more about how to plan, build, and live the tiny life? Be sure to subscribe to the Tiny House Lifestyle Podcast wherever you prefer to listen!